FINAL8 path to glory laid out for EHL Men and Women

The match-ups for next Easter 2020’s Euro Hockey League FINAL8 carnival have been laid out with 16 club teams set for battle for the EHL Men and Women’s titles.

EHL Women will make its debut next Easter and will run in tandem with EHL Men with at the same venue with the same top-class sports presentation and elite quality broadcast production.

De Goede, who will play in the competition with AH&BC Amsterdam, said: “It’s very exciting and I am really looking forward to it. I have always loved watching the EHL for men, been there live and watched it on tv. It looks like one big show and the hockey is great.

“I always love it when men and women’s tournaments come together and, for women now, it can be a big show as well.”

The EHL Women’s draw, as per EHF regulations, is a fixed one based on the Olympic seeding order. It places 2019 EuroHockey Club Champions Cup winners AH&BC Amsterdam at the top of the draw where they will face Belarus champions HC Minsk.

They will be up against the victor from a mouthwatering clash between Germany’s UHC Hamburg against Dutch runners-up from last season, HC ’s Hertogenbosch.

The bottom half of the draw features Germany’s Club an der Alster against English champions Surbiton while Ireland’s Pegasus go up against Spain’s Club de Campo de Madrid for a place in the FINAL4.

Looking at the draw, de Goede reacted by saying: “HC Minsk will be a good test for us [at Amsterdam] to play our own game and enjoy it.

“I think the Den Bosch game against UHC Hamburg is a good one. Playing a German side, they are always good at defending and Den Bosch is really good at attacking so it will be really interesting.

“The Germans sides are always good and the team from Spain can also be strong. It will all be exciting.” 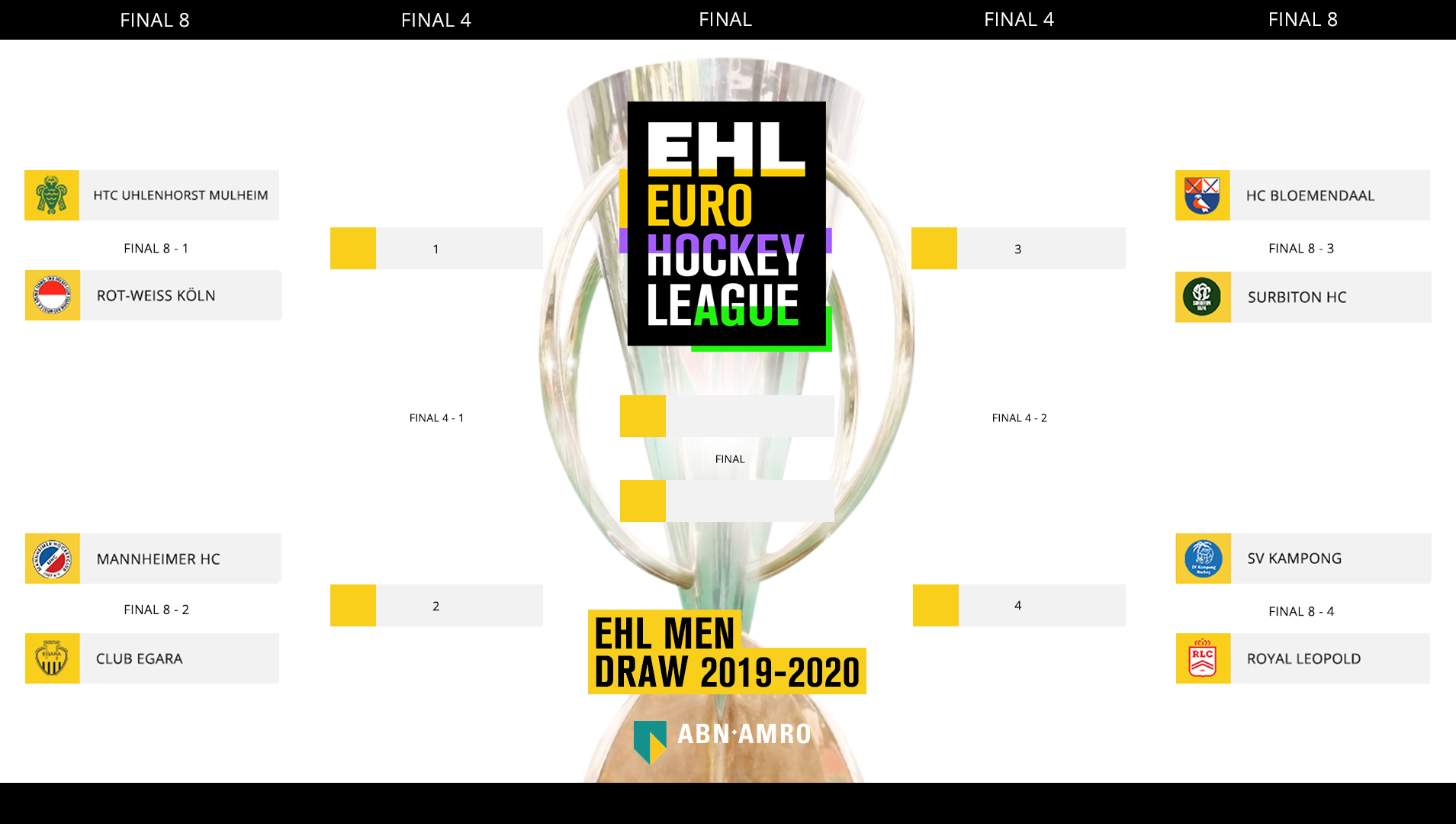 For EHL Men, the FINAL8 match-ups were confirmed. Four sides were already pre-qualified as national champions and they were joined in the FINAL8 by qualifiers from the recent KO16 in Barcelona.

The draw ended up with the top half of the draw being dominated by German participants with HTC Uhlenhorst Mülheim facing their rivals Rot-Weiss Köln. The winner of that game will meet either Mannheimer HC or Spanish winners Club Egara.

The other half sees HC Bloemendaal return to the EHL in search of their fourth title. Their first challenge sees them face English side Surbiton. Either SV Kampong or Belgium’s Royal Leopold await in the FINAL4.

Vanasch – a winner of the EHL with both Oranje-Zwart and Waterloo Ducks – said: “It is an incredible competition. You play against the best clubs in Europe, the best players from around the world so you need to be really on top of your game. It’s a similar level to the international game!

“In the draw, we have a really big clash of German clubs which will be huge. There are four huge games there but, as a Belgian guy, I am looking at Royal Leopold against SV Kampong. Kampong will be the favourite but I think Leo have a real chance there.”

** The match schedule, venue and tickets for the EHL FINAL8 will be confirmed in due course. Keep an eye on the EHL website – www.ehlhockey.tv – and social media channels for all the latest information.